Bonnie has an incredible eye for capturing a beautiful moment through her camera that we don't see in real life.
Steven Dexter Director
Bonnie Britain not only produces wonderful production & press photographs. But also is a joy to have in any environment and makes all feel at ease and comfortable on the shoot.
Thomas HopkinsGinger Quiff Media
Bonnie has become our “official” photographer for our tours. She has a great eye for live shots and always manages to capture the essence of the performance. I highly recommend her!
Jack Applebaum FEAAEmeritus Director of Entertainment & Talent @ Peel Talent Ltd
Bonnie’s photos were by far the best from a show that was very heavily photographed by a number of photographers. She was able to capture the drama and depth in the lighting and use it in her compositions to enhance the look of the performers in her shots rather than just racking the exposure up, which a lot of inexperienced photographers do, to see the talent clearer but in doing so, lose all the drama of that moment in the show. Bonnie was able to balance this perfectly.
Fraser Walker | Programmer | Designerwww.fraserwalkerlighting.com
Bonnie took some fantastic production shots of both rehearsal and performance, and completely captured the essence of our piece. She was also a lovely presence in the studio!
Fenton Gray | Actor | Director www.fentongray.com
Bonnie is sensitive at taking images when in rehearsals. She is great at capturing the atmosphere of specific moments. 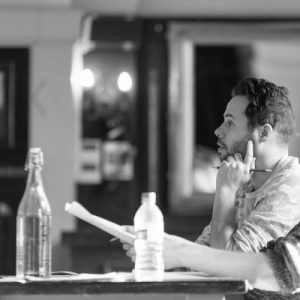 Scott Le CrassDirector
Bonnie’s photography skills made our little fringe show look like a West End Production. The image quality and her ability to capture the perfect moment made her work an invaluable asset for my marketing outreach. I can’t recommend her enough and l’m looking very much forward to the day we will work together again.

Samuel Ch. ZernigUK’s #1 German Stand-up (under the age of 35)
Bonnie was great to work and very professional. She immediately understood what we wanted and took some lovely photos which really captured the essence of the choir in both rehearsal and concert.
South West Essex Choirwww.swessex-choir.org.uk
Previous
Next
error: Content is protected !!