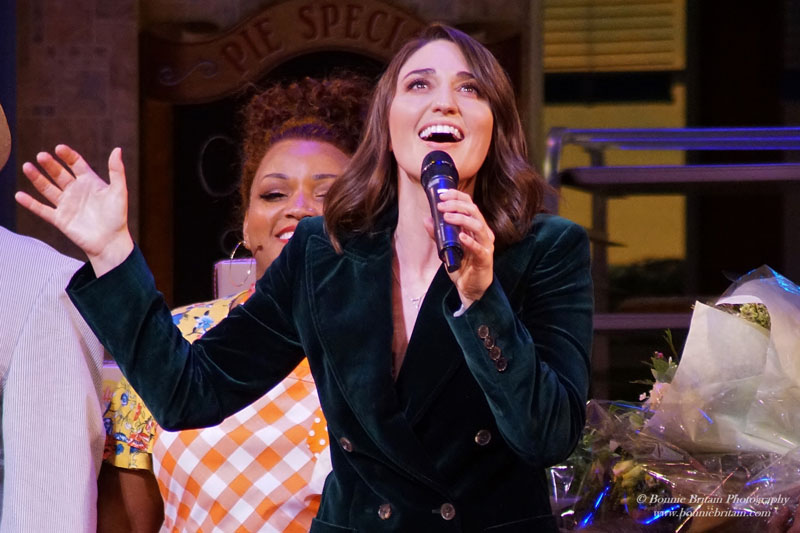 after covering the two launch events for Waitress I was so chuffed to be invited to press night.  You can see my previous coverage of the events at http://www.bonniebritain.com/official-london-launch-of-broadways-smash-hit-musical-waitress/

My 5 Star review has been published on or see below. https://www.lastminutetheatretickets.com/review-of-waitress-at-the-adelphi-theatre-london/

Below are a selection of photos from Press night with a couple of guests and the curtain call where all the creatives joined the cast on stage. Hope you enjoy.

Press night at the Adelphi Theatre London for the musical Waitress and they are going all out to make us feel welcome. I love it when a theatre gets involved and the Adelphi’s wonderful Front of House staff dressing up in waitress uniforms and selling pies, a photo-stand of Joe’s Diner for the audience to pose with and a comments notice board – they are really getting involved, which makes you feel very welcome as soon as you enter the theatre
I loved the show. I had seen little snippets at the launch and was excited to see the full show and it surpassed all of my expectations. Central to the story is the relationship between three friends – Jenna, Becky and Dawn played by Katharine McPhee, Marisha Wallace and Laura Baldwin, who all work as waitresses in Joe’s Diner. For me, their distinct personalities and chemistry were instant and despite their flaws, they were very relatable and I was captivated by them and their relationship throughout the musical and wow can these girls sing!
The beautiful music is composed by Sara Bareilles who takes you through every emotion with her stunning writing from laughing at the lyrics like ‘time to pee on a stick’ to bawling my eyes out at ‘She Used to Be Mine’ this original score is the glue that makes this musical what it is.
I have to also commend the direction by Diane Paulus and choreographer Lorin Latarro – some of Jenna’s ‘in her head moments’ are so beautifully crafted making this, in my opinion, a very modern and contemporary work of art.

I may have only so far spoken about the women but the male cast were just as spellbinding with a stand-out performance from David Hunter as Dr Pomatter, who plays the part so well that we as an audience should hate him for his actions but we were won over by his quirky and charming character.

I cannot fault any of this cast as they were all a joy to watch, just like the pies that Jenna bakes in the story, all the ingredients are just right – making for one yummy show!