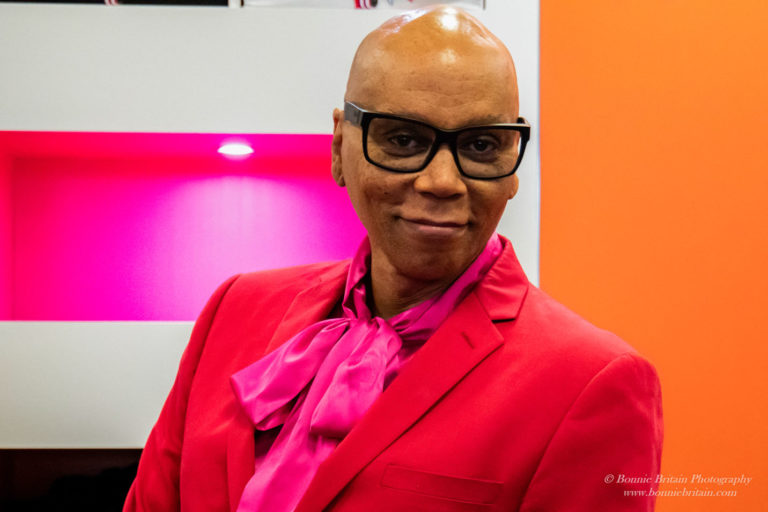 On Saturday 18th and Sunday 19th January 2020 – The first ever DragCon UK was opened by Drag Race host and Emmy ® Award-winner RuPaul. I was there to record a radio show for Maritime FM that was broadcast on the 28th January. I have now uploaded it to my You tube where you can listen again ( see below).

I had a wonderful weekend,  I spent lots of time in the press room for interview ops but I also managed to get round the convention see a few of the Queens in their booths take some photos and attend a couple of the talks/ panel discussions which I loved.
There really was so much to see and do. Every Queen from season 1 of Drag Race UK was there singing autographs selling merch and posing for photos along  with a selection of the American queens from their 11 seasons and some other guests had their own meet and greet booths too including Michelle Visage & Jodie Harsh.
The con was busy and for me far too busy, credit to all the queens with queues so long they didn’t have time for rest breaks as they wanted to try to meet everyone, but it was a real shame that some people after queueing didnt get in or meet who they wanted due to the crowds. As it’s the first year of DragCon UK I am sure they will address this for the next time and maybe use a bigger venue or maybe have a timed queue system so people could plan their days out better.

RuPaul was around the con for both days appearing in panel discussions Djing a dance party both days in the main arena, and also Ru met fans and signed autographs at the official dragCon merch booth where I was lucky to meet RuPaul. Can I just say that Ru has an even more infectious laugh in person, What a pleasure to meet THE QUEEN.

My absolute favourite part of the weekend was attending the ‘Aj and the Queen’ panel talk with RuPaul, Trinity the Tuck and JuJuBee who also star in the NetFlix series.
I had binge watched the series on NetFlix and really loved it, and would highly recommend it.  ‘Aj and the Queen’ has a funny & clever script with so much heart and humor. Credit to Ru using so many of the past RuGirls from Drag Race, it was fab to see them esp with some making their acting debuts.
In the discussion we found out that Trinty the Tuck had auditioned for other parts before landing her role, and heard lots of on set funny stories. RuPaul lead the discussion and at the end of the talk opened up questions to the public, press were not allowed to film but I am pretty sure they were live streaming so go hunt the official DragCon sites to see them spill all the tea.
There was so much fabulous entertainment on the main stage from newer drag acts like Poppycock who was simply fabulous singing live and dancing her dress off. To The Frock Destroyers who brought the house down on the sunday performing their now legendary track ‘Break Up –  bye bye’.

As well as all the entertainment the arena was filled with stalls, make over stations and photo opportunities, ( some of which I had to take advantage of).

I loved meeting the guests in the press room and in their booths, everyone was really warm and lovely and the weekend was full of fun, laughter, positivity and for me an insite in to the world of drag.

Thank you to the guests that had time to chat to me for my radio show and to everyone I met there. I hope this event becomes an annual one- but I think you are going to need a bigger space.

See I had lots of fun!!! I even bumped in to Todrick Hall and Vanessa Williams – what a total treat. The Brit Crew were too much fun.

Go Follow all official DragCon news on social media, or see their website here and lets bring it back next year.