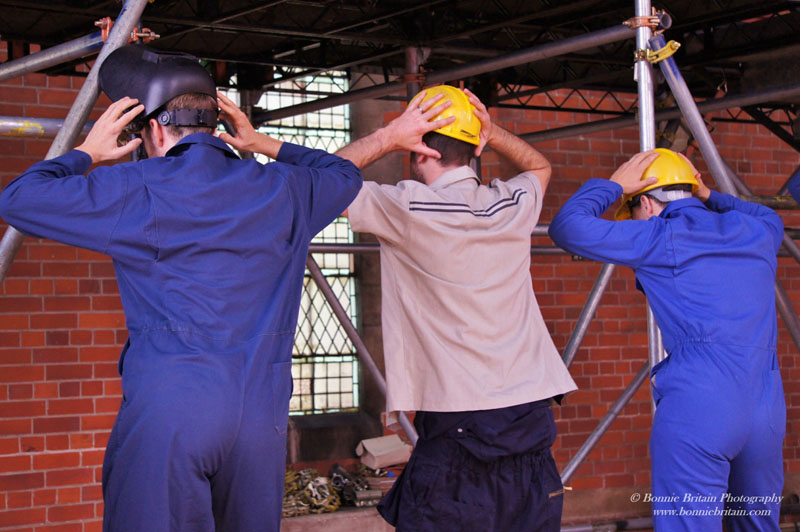 On the 22nd October- the 27th October Full Monty the play is heading to one of my favourite theatres. The Churchill in Bromley.

So when I was invited down for a little sneak peak in the rehearsal room and chat with some of the cast I jumped at it!

Below as first published on www.londontheatre1.com is my write up of the day. I have added some more photos for you to enjoy! 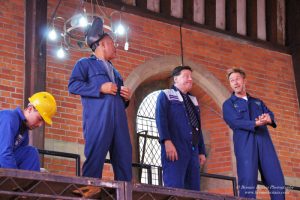 As soon as I arrived at the rehearsal location for The Full Monty play I knew I was in for a laugh with the cast. After I was handed a glossy press pack, cast members Gary Lucy and Kai Owen came over to have a nose at it too as they had not yet seen it. On inquiring whose torso was on the front cover Gary promptly and proudly got his out to show me – it was most definitely him I can confirm and yes that fit body is as nice close up, just not as tanned as the pic – maybe Gary has been worked too hard in rehearsals this past few weeks to get out and tan himself!

We were led to where the rehearsals were taking place and greeted by a rigged-up set with all cast and creatives, the cast were all set and in their boiler suits/workmen get-up costumes and ready to give us a little preview. Well, It was a fun-packed laugh-a-minute scene. I would describe it as short and sweet but there was enough innuendo flying around that room as it was, so I will try not to give you more!

I have never seen The Full Monty play on stage before even though it has toured – I do love the film and this feels very authentic and respectful to that.

The cast were a real treat to chat to afterwards, giving up their lunch break to talk with us. As it was lunchtime there was lots of food on hand and the first member of the cast I sat down with was James Redmond. He had the healthiest plate of lunch I have ever seen – basically carrots and prawns – so I had to ask him if this was a diet for the play as he was about to get his kit off for the nation to see. James told me how it was indeed the reason as his character mentions going to the gym in the script so the producers asked him to look the part. James told me they have been very supportive and have got a personal trainer in and he is on a no-carb diet for the run of the show which is fine – but he has not noticed much difference himself yet. It will not be the only physical change as James will need to play this part in his words, “the well-endowed member“. It is an ongoing laugh for the cast that they use, again James words “a fake large appendage” to facilitate this, which I was given a very up-close view of in the rehearsal – blush! Which is the cause of many jokes!

When I was chatting to Lewis who has done the tour previously – he recalled a time during a show when the character drops his trousers to show it off saying “how about this?” and the thing fell off in front of the audience. Lewis said the director just picked it up and handed it back calmly saying “there you go guy” and all the cast fell apart at this time as they were all so in shock and trying so hard to stay in character. Well, that would have been a sight to see I am sure.

James is one of the new cast for this tour and it is his very first onstage acting role. He told me “I am loving it a lot as it is so different to TV work, I have a voice coach coming in tomorrow and she will help Joe (another new cast member) and myself as we have only ever done lots of TV work before so we need to learn to project more. It is so brilliant, with such a great team and they are all very supportive and helpful.”

One thing I wanted to talk to the cast members about was the dance moves – the iconic part of the film where they are all in a queue at the post office and start to rehearse their steps always makes me laugh. James said he hadn’t intentionally been practicing his steps but just sometimes he hears music with the same beat and he can’t help it, “I was in the gym and I did it, which was embarrassing. I was there with all these macho blokes standing around and I found myself doing a little two-step in the corner. I have never danced before so I am just trying to get it in my bones and I do find myself just dancing around the place.

The other cast I chatted to who have all been in the play before Gary – Lewis and Kai told me they hadn’t been caught dancing anywhere funny but Lewis and Kai both told me they enjoyed practicing the dance at home with their children.

It’s so obvious to see that most of the lead cast keep returning as they seem to have a real bond and fun time on tour, also they are all so excited to have James and Joe join them this time too. Kai was telling me how they are real lads on tour and there is lots of football talk, jokes and going out for drinks and the whole crew get involved too. “I do remember on the last tour, we were at Leeds Grand and had all been out on a Friday night, when Gary came in on a Saturday a little worse for wear – Ellie our wardrobe mistress and her assistant Sarah had managed to get the keys to Gary’s dressing room and they Christmas wrapped everything! And Imean everything! – his airbed, his costume, even his fag packet and all the cigs inside it, it was a great wind up but Gary just couldn’t handle it. he never did get his own back as they were just too quick for him.”

Gary Lucy is a laugh a minute and a real pleasure to chat with, he clearly loves his job. The Full Monty play was his first ever stage job and he has been back every tour since as he is having so much fun, Gary said “I went to see it in the West End and I had only done TV at that point, I really enjoyed it and I went away thinking I would like to do it and wondering how I could put my stamp on it, I am so grateful to have been given this opportunity. Each production has been different and obviously working with a different cast you can’t not change it up a bit so there have been amendments and in particular, on this tour, they have made some changes. My boy in the play is slightly older this time which has changed the dynamics again” Gary then sang the praises of Frazer Kelly who plays his son Nathan saying he is the best Nathan he has worked with.

I did have a very quick chat with Frazer too and he assured me that the men are not teaching him bad habits but he would teach them some good ones, from the stories I have heard today I think the fun will very much still be on and off stage for the tour.

I came away thinking I cannot wait to see the full stage production and the cast in all their glory! When I asked Gary to sum up why people should book up to see it soon his response was simply; “Come and forget about all the nonsense in the world for 2 hours, have a belly laugh and go away buzzing – oh and you get to see my willy!” Well, I should have expected that answer! I am still not sure if that last bit will attract or detract from the bookings – but I am sure this play will be a good one!