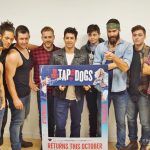 Dein Perry’s Tap Dogs is returning to the London stage this October as part of their world tour. I was invited along to a showcase event hosted by Adam Garcia who starred in the film version ‘Bootmen’ and also played the lead Foreman in a previous West End season of Tap Dogs. Adam Garcia, as charming as ever … Read more